What is a quinceañera? 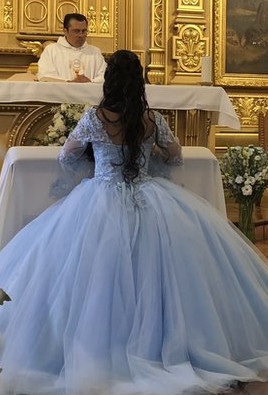 The quinceañera is a traditional celebration of life and gratitude to God on the occasion of the fifteenth birthday of a young Hispanic woman. The ritual emphasizes her passage from childhood to adulthood. The family usually requests a Mass or a blessing to be held in the Church. The rite is frequently celebrated in several countries in the Americas, including Mexico, Central and South America and the Caribbean. It is frequently requested by Hispanic Catholics in the dioceses of the United States of America.

What is the origin of the quinceañera?

The tribes of Meso-America, possibly the Mayas and Toltecs, celebrated elaborate rites of passage for their young men and women. Rites of passage are known to have existed in the Iberian Peninsula as well. The Spanish conquistadores may have brought the practice to Meso-America. It is possible that the missionaries would have approved of this practice, since these rites closely paralleled Christian practices of initiation and marriage. The ancient Mozarabic Rite of the Iberian peninsula had elaborate rituals marking the passage of baptized adolescents, each of which included specific references to Christian initiation and each of which was celebrated following the reception of Holy Communion at Mass. With the suppression of the Mozarabic Rite, many of these rituals passed into popular religious practice.

How is the quinceañera celebrated?

In the presence of family and friends, the young woman (the quinceañera), often accompanied by fifteen young men and women of her choice (damas y chambelanes), enters the Church in procession, together with her parents and godparents. If she has prepared the readings, she may serve as the lector for at least one of the readings. After the Liturgy of the Word, the quinceañera makes a commitment to God and the Blessed Virgin to live out the rest of her life according to the teachings of Christ and the Church by renewing her Baptismal promises. Then, signs of faith (medal, Bible, rosary, prayer book) which have been blessed and may be given to her. A special blessing of the quinceañera concludes the Liturgy of the Eucharist. After Mass, the young woman is presented to the community. The ritual continues with a dinner and sometimes a dance in her honor.

Who are the participants in the celebration?

The quinceañera and fifteen young men and women of her choice are joined by members of her family and friends for the celebration. The priest(s) or deacon has a key role as the one who represents the Church and who prays the blessing over the young woman. The local community is also encouraged to gather for the celebration.

May the quinceañera take place outside Mass?

The ritual may be celebrated simply, outside Mass with the young woman, accompanied by her parents and godparents, coming before the priest or deacon to receive a special blessing in the Church. Or, there may be a more elaborate celebration with elegant clothes, flowers, music and decorations and with more than one priest presiding.